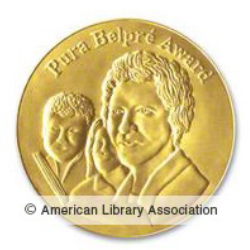 2021 marks the 25th anniversary of the Pura Belpré Award that recognizes excellence in the portrayal of the Latinx experience. It also celebrates, commemorates, and preserves the pioneering work of Puerto Rican librarian, author, and storyteller Pura Belpré who believed that readers need to see their stories in children’s books. The award promotes outstanding works of literature for youth by Latinx and Hispanic authors who live in the United States. The May/June 2021 issue of the Horn Book Magazine celebrates this anniversary with articles about Belpré and her legacy. A resource list at the end of this post list these and other resources about Belpré.

Who was Pura Belpré?

Pura Belpré promoted diverse books and stories for Spanish-speaking children at New York Public Library (NYPL). Belprés career distinguished her as NYPL’s first Black Puerto Rican American Latina librarian and Spanish children’s specialist (Nunez 2009, p. 59). Her work for NYPL spanned 1921 to 1978. Due to a lack of books with Puerto Rican folktales in the library, Belpré became well-known for sharing these stories through storytelling, puppet theater, and by writing and publishing her own volumes of folktales. Her outreach programs served as a model to librarians and teachers who established similar programs for serving Spanish-speaking communities throughout the country (Hernandez-Delgado 1992, 432).  Belpré’s work included reassessing “local library collections in meeting the interests of the local community” (434). In 1971, seeing the need for a list of children’s books in Spanish, she coauthored Libros en Espanol ~ which became a valued collection tool for teachers and librarians (435). More about Pura Belpré's life and career at the New York Public Library is featured in Herbert Norat's blogpost Pura Belpré: Library Storyteller.

To recognize and honor Belpré, in 1996, Reforma, the National Association to Promote Library and Information Services to Latinos and the Spanish Speaking in partnership with the American Library Association’s (ALA) Association of Library Services to Children (ALSC) began awarding the Pura Belpré Book Award to books for young people that best portray, affirm, and celebrate the Latino cultural experience. 2021 marks the first year that the Pura Belpré Award categories will include young adult books. 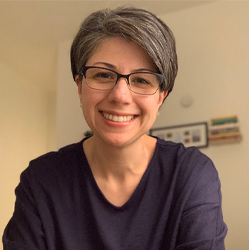 Mara Cota, SDSU Assistant Librarian, served on 2021 Pura Belpré Award selection committee. Cota’s appointment to the committee came as a result of her long-time involvement with the Young Adult Library Services Association (YALSA) and her experience serving on both the Printz and the Alex awards committees in the past. Cota is Mexican and was born in the United States. She delights in considering her background in doing this work and being able to see it in works of literature for young people. Cota says these books explore cultural experiences of people living in the U.S., in Central America, and in South America.

“The work of the committee was very focused on titles that emphasize the Latinx experience”, says Cota. “As much we would like the numbers of these books to be high, the number of books is quite small.”

One exciting thing about book award season is that students throughout the country form their own mock book award committees to select the titles they think should be recognized with the various ALA ALSC Youth Media Awards like the Pura Belpré Award. I asked Cota what advice she would give to young people participating in mock awards committees in their schools and libraries. Cota says that doing this work is about reading the books over and over again so that your view of the book deepens. She says committee discussions are characterized by the distinctive backgrounds and experiences of the committee members. Cota says kids should give themselves time to discover the books, to read and re-read titles. They should use a note-taking system to jog their memory about books. Kids should stay open to different kinds of books than those they might normally read. They should go into the process with an open mind and give each of the books a chance.

Interested in learning more Pura Belpré? Check out the following books and articles.

Denise, A. A. (2021). Titi Pura: A Conversation with Cristina Maduro and Lisa Fenstermarcher. Horn Book Magazine, 97(3), 20-23. An interview with the great nieces of Pura Belpré about their Titi Pura.

This blogpost was written by Linda Salem, Librarian, lsalem@sdsu.edu.